"Using the word "original" to describe Sean Healen would be an understatement! He is my favorite find of the last decade." - Jay Boy Adams

“You are nothing short of mighty.” - Scott Mathews, Producer (Tikitown Studio)

“With the edge of a Ryan Adams and the soul of a John Prine.” - Gabe Gomez, NM Magazine 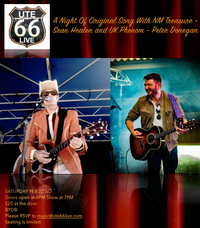